The underlying data that comprises the Eastern Young Cattle Indicator (EYCI) continues to show optimism within the restocker sector, as favourable seasonal conditions continue to encourage restockers to pay above lot feeders and processors for EYCI style cattle. Will the enthusiasm of restockers last into the 2017 season or is it set to fade? 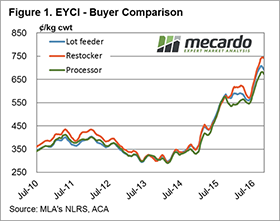 Figure 1 highlights the average price paid for EYCI type cattle by the three key buyer groups and clearly shows the preference for restockers to pay above the price levels set by lot feeders and processors since the middle of 2015. The last time this type of enthusiasm was evident among restockers was during the last favourably wetter season during 2011.

Taking a look at the buyer comparison on a volume basis, figure 2, which shows the average weekly throughput going to each buyer groups of EYCI cattle smoothed over the quarter in order to more easily identify trends in volume movements. We can see that restocker volumes have tended to fluctuate on a reasonably consistent pattern between a 3,000 – 6,000 head average per week since 2010. 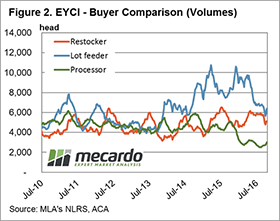 Comparing the 2011 and 2016 seasonal movement of the restocker spread to the EYCI, or, in other words, how much more in percentage terms above the EYCI that restockers have been prepared to pay for EYCI style cattle – figure 3. We can see that the current season has replicated the 2011 pattern reasonably closely, apart from a few months during May to June. Clearly, as the average seasonal pattern demonstrates, the restocker spread to the EYCI tends to peak twice during the start and end of the year with a trough experienced through winter, which is unsurprising as tighter supply during this time can often lead to higher prices and potentially discouraging restockers to chase the market up. 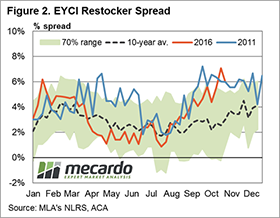 The pattern set by the average restocker spread to the EYCI shows a reasonably stable finish to the year as the trend line hovers around the 4% region for the November to December period. The 2011 trend saw a steady build up in the spread from around 2% early August to 6% in mid-September, finishing the remainder of the year nearer to 6% for much of the time.

What does this mean?

The average and 2011 spread patterns indicate a fairly stable 5-6% restocker spread to the EYCI to continue toward the end of the season. Earlier Mecardo analysis of the EYCI suggests an initial support level between 635-655¢ and major support at the 610-615¢ level as we head toward the end of the year. Based off these support levels restocker buying levels for young/store cattle are likely to find initial support at the 665-685¢ level and major support at 640-645¢.

Indeed, the expectation for tight cattle supply into 2017 and, assuming the weather conditions continue to point to a favourable climate for rebuilding the herd, there appears to be no reason why restocker’s won’t continue to display an optimistic approach when bidding for young/store cattle for the rest of 2016 and into early 2017.

The restocker spread to the EYCI is likely to remain at the higher end of the normal seasonal fluctuations in the spread pattern for the rest of 2016 and into early 2017.