Numbers were steady and the quality was good. Most weights were represented and yearlings made up the bulk of the young cattle. There was an increase in the number of weaners and yearling heifers were limited as were prime grown steers. Around 220 cows, mostly heavy 3 and 4 scores were penned. There were some holes in the market but averaged to sell to a firm to cheaper trend. 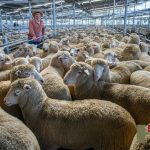