Last week I told a group of growers that the lamb and mutton spread was likely to close up through lamb prices falling. This week we saw the spread close up earlier than expected, and lamb stayed steady. Mutton is making a very counter seasonal charge. 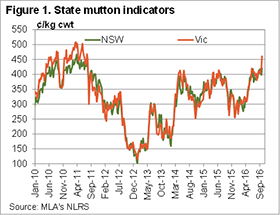 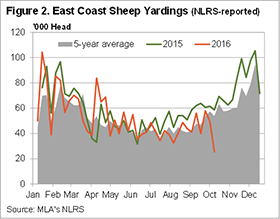 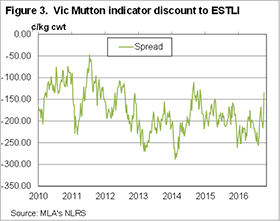 There was little movement in trade lamb markets this week, but other categories made some interesting moves. Merino lambs managed to bounce back in Victoria and NSW this week, pushing the national indicator back to 551¢.

Light lambs, which are 12-18kg lambs destined for processors moved to a premium to the ESTLI in Victoria, SA and NSW, sitting between 603 and 607¢.  Light lamb prices are no doubt being assisted by demand for restocker lambs. Lambs going to restockers or feeder were at $101 and $106 per head respectively, which was largely steady, but 20-25% above the rates of this time last year.

Mutton supply contracted significantly, giving further weight to the theory that sheep producers are restocking.  Figure 2 shows that this week’s sheep yardings were the lowest since 2012, and that was in a short week.

Widespread rainfall in Victoria and SA, along with a Monday public holiday in NSW, obviously helped tighten supply, but it’s highly unusual to see if fall this far when it normally increasing.