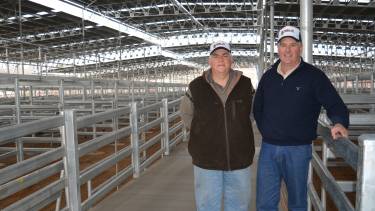 THE large livestock selling complex once described by proponent businessman Brendan Abbey of Yass as inevitable, is now a reality, with the South Eastern Livestock Exchange (SELX), set to open mid August.

Built on 14 hectares on the outskirts of Yass, the $15-million exchange is expected to sell about 1.3 million head of livestock annually, acting as an incentive to boost production on farms in the area

SELX Board Directors Col Medway and Rohan Arnold have confirmed 13 agencies are forecast to commit to operate and sell livestock at SELX with the complex able to accommodate 3800 fat cattle and 30,000 sheep and lambs.

It is expected that more than 1.2 million sheep and 150,000 head of cattle will pass through the site every year.

Rod Bourlet, manager of SELX, said the larger, safer, and more efficient facilities were the way of the future.

“We are looking at a brand new facility that is safe to work in and that complies with all of the environmental factors efficiently and safely,” Mr Bourlet said.

“Everything is going towards larger regional selling facilities because it makes more business sense.”

In the wake of a number of new livestock facilities being proposed and built to replace older and smaller government and privately owned yards, Mr Bourlet said those yards are becoming less compliant with issues such as being close to residential areas. “We are situated in a business park area that is non-residential,” he said.

On a weekly basis, sheep and lamb sales will take place on a Wednesday and cattle sales on a Thursday.

Mr Bourlet said being so close to the highway presents as a huge advantage, and he sees the complex being profitable for everyone.

“Virtually we can move livestock easily in and out of the area straight to the manufacturing processing plants,” Mr Bourlet said.

“It also means shorter distances for a larger number of stock that are all placed and purchased in one area.”

Agencies from Boorowa through to Braidwood, Cooma and Moss Vale are expected to sell through the exchange.

General public will have the opportunity to go behind the scenes of SELX before it starts trading, with a public open day on Sunday, July 3.  Information can be found on SELX Facebook page.