Lamb numbers were steady and the quality was mixed. There were some excellent heavy and extra heavy lambs, trade weights were again limited and there were only a few store lambs. Quality varied with some longer skinned lambs drying off and not presenting as well. Short skinned lambs were more desired by the buyers. Merino trade were better supplied.

Mutton numbers lifted and the quality was good with plenty of sheep having good cover. Medium weights were best supplied with heavy crossbred ewes not as well supplied. The market sold to a dearer trend. Medium weight ewes sold from $121 to $191/head for long skinned Merinos. Heavy crossbred ewes $193 to $211 and heavy Merinos reached $210/head. Wethers reached $250/head. 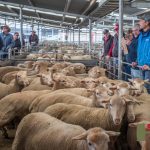 There will be no June Special Store Cattle sale th