Lamb numbers were steady and the quality was fair to good with some of the new season lambs starting to go dry. Trade lambs were limited and heavy and extra heavy lambs were well supplied. The were also good numbers of light store lambs. The market sold to a firm to cheaper trend with the exception of the light new season store lambs.

Mutton numbers were similar and quality was mixed. Prices were cheaper with light sheep having the biggest fall. There were a few more orders for ewes to return to the paddock. Medium weight ewes sold from $130 to $174/head. Heavy crossbred ewes made from $175 to $220 and heavy Merinos sold from $188 to $215/head. 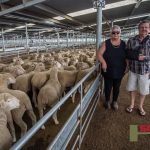 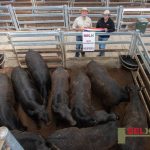