Lamb numbers lifted and the quality improved. Heavy lambs were again best supplied, while trade weights were limited. There were a few pens of light new season trade lambs and a sprinkling of Merinos. The better lambs were dearer while the lighter secondary lambs eased. 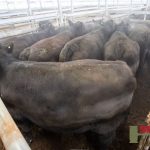